Last time we saw a total lunar eclipse in India was in December 2011 when it was seen in full glory all across India. Now the time has come once again to view another Total Lunar eclipse but with a difference! A total lunar eclipse will take place on evening of October 8, 2014, Totality will not be seen in india as moon would be in penumbral eclipse at the time of rise. We in delhi will get to see only the penumbral eclipse and that too while moon is low on the horizon.
The entire October 08 eclipse is visible from the Pacific Ocean and regions immediately bordering it. The northwestern 1/3 of North America also witnesses all stages. Farther east, various phases occur after moonset. For instance, the Moon sets during totality from eastern Canada and the USA. Observers in South America also experience moonset during the early stages of the eclipse. All phases are visible from New Zealand and eastern 1/4 of Australia - the Moon rises during the early partial phases from Australia's west coast. Most of Japan and easternmost Asia catch the entire eclipse as well. Farther west in Asia, various stages of the eclipse occur before moonrise. None of the eclipse is visible from Europe, Africa, and the Middle East. 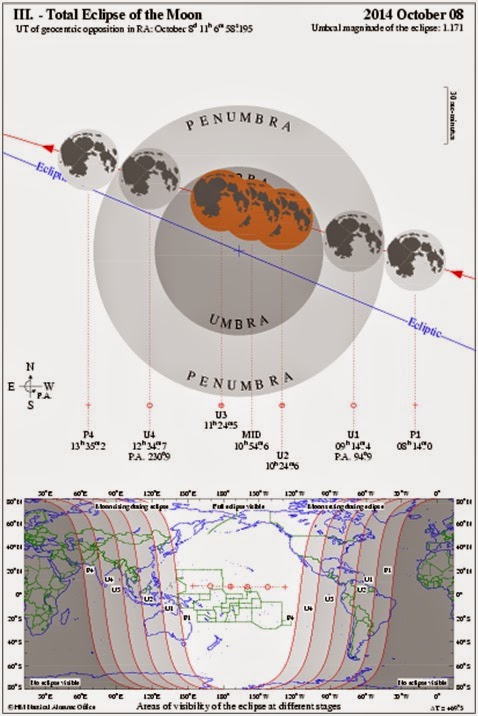 Visibility of the Eclipse 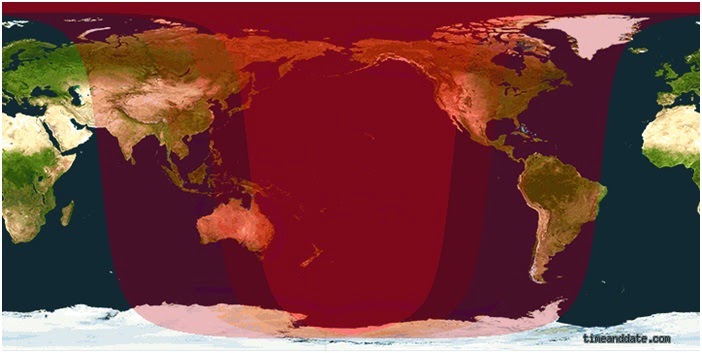 Intense red shading: Observers within this area can see the eclipse from beginning to end.

Red shading right/east of intense shading: Observers within this area can see the eclipse after moonrise/sunset.

Red shading left/west of intense shading: Observers within this area can see the eclipse until moonset/sunrise.

No coloring: Eclipse is not visible at all

Timings of the Eclipse:

* The Moon is below the horizon in New Delhi some of the time, so that part of the eclipse is not visible

What is Lunar Eclipse?

We live in a world that seems so ordered; the Sun rises, goes across the sky and then sets. The Moon goes through its phases from new to full and back again. It all seems like clockwork, and then, something unusual happens that seems to throw the orderly timing of the cosmos into chaos. On a night when the moon rises full and beautiful, it starts to change; at first it is so subtle few notice it. But then, every so slowly, the moon begins to dim, and more alarming yet, it disappears.

One can only imagine how frightening the sight of a lunar eclipse must have been for our ancestors. Far more than us, they were in tune with the rhythms of the cosmos, the motions of the Sun, Moon and planets were the motions these people lived by. They told time by the daily passing of the Sun, or full moon to full moon gauged longer periods of time. And the very stars marked the passing of seasons. The skies were orderly and dependable, except for when an eclipse happened. During that time, chaos reigned, and our ancestors prayed and begged for the Moon to be returned to the sky. 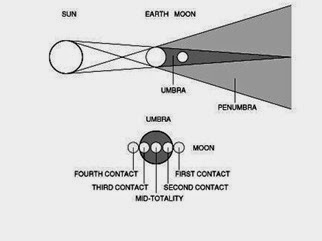 Why lunar eclipses don't occur every month:
Since lunar eclipses occur always at full moon, it makes sense to ask why each full moon does not generate one. Eclipses are relatively rare because the plane in which the moon orbits around Earth is tilted 5 degrees compared to the plane of Earth's travels around the sun, a plane that astronomers call the ecliptic.
To visualize, think of two hula hoops — one big and one small — floating on the surface of a pool, and push the inner one down so that half of it is below the surface and half above. When the moon gets into the ecliptic — right at the surface of the pool — during its full phase, then a lunar eclipse occurs. (The word "ecliptic" stems from the word "eclipse.")
The geometry of any eclipse — the relative positions of the sun, Earth and moon — is eventually repeated during a set of complex cycles that each last just more than 18 years. This Saros cycle, as the whole thing is called, is behind the bunching of eclipses, too. Astronomers have figured it out and can predict eclipse timing and circumstances far into future.

The Lord of the rings is once again shining brightly in the eastern skies after sunset, giving us a opportunity to view this marvelous planet and its rings through a telescope. It reaches opposition at 18:29 UT on May 10th 2014 (23:59 Hrs IST). What is Opposition? Lets find out.

A planet is said to be "in opposition" when it is in opposition to the sun, as seen from the Earth. At opposition a planet has the following characteristics:
·         It is visible almost all night, rising around sunset, culminating around midnight and setting around sunrise.
·         At this point of its orbit it is roughly closest to the Earth, making it appear bigger and brighter.
·         The half of the planet visible from Earth is then completely illuminated ("full planet").

How to look for Saturn?
Look for the brightest object in the eastern skies one hour after sunset and you will find Saturn glowing on the horizon. Saturn is around 18.7 seconds of arc in apparent size as seen from earth through naked eyes (in comparison Full moon is around 1800 seconds of arc). It is shining at around 0 magnitude (as bright as star Vega).

Its not that one should only look at Saturn on the opposition day, a within a few weeks before and after the opposition are in fact the best times to view Saturn this year. The Earth and sun passed through Saturn's ring plane in 2009, providing a nearly edge-on view of the rings. The ring tilt started increasing (opening wider) year by year and it will reach to a maximum tilt of 27 degrees (as seen from earth) in 2017. This year it will be showing a reasonably good view of the ring planes. 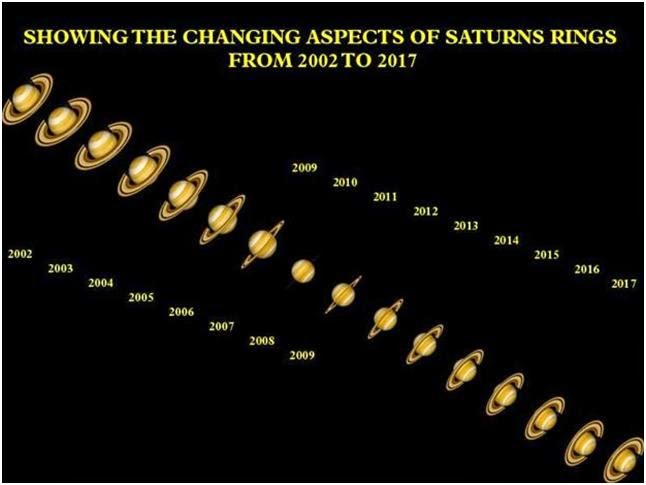 Saturn can be seen with a moderate sized telescope. You may be able to see the planet and rings clearly, depending on such variables as the power and cleanliness of your optics and eyepieces. Weather and atmospheric conditions affect the view through your telescope, too. If you are observing Saturn at low power through a small 60mm - 100mm aperture telescope it will look like a golden oval and you may not see the rings distinctly. Some small aperture telescopes will show the moon Titan, the rings and Cassini Division, the large gap between the rings of Saturn, while others will not. Larger telescopes will reveal not only the gold and brown cloud bands (bright zones and darker belts) on the planet but also the Cassini Division. Through a large telescope, you should also be able to see several of Saturn's moons in addition to Titan. It is best to view Saturn when it is highest in the sky so there will be less atmospheric dust and turbulence between you and your target. 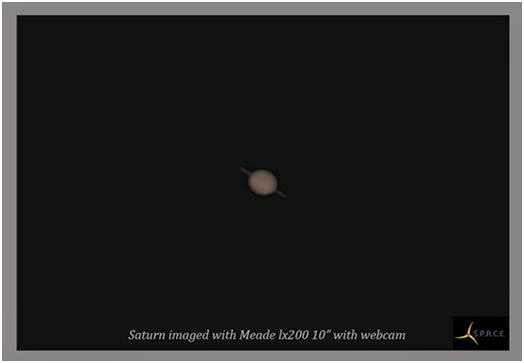 Saturn captured when tilt was minimum in 2009 by SPACE team.

So what have you been waiting for? Take out your telescope out and have a look at the Lord of the rings!!!

Some extra Info about Saturn:

Saturn is the sixth planet from the Sun. It is a gas giant (also known as a Jovian planet, after the planet Jupiter), the second-largest planet in the solar system after Jupiter. Saturn has a prominent system of rings, consisting mostly of ice particles with a smaller amount of rocky debris and dust. It was named after the Roman god Saturn (the Greek equivalent is Cronos, father of Zeus). Its symbol is a stylized representation of the god's sickle

Saturn’s Moons:
Till now around 62 have been found. 52 moons have been officially named. In alphabetic order, they are: Aegir, Albiorix, Anthe, Atlas, Bebhionn, Bergelmir, Bestla, Calypso, Daphnis, Dione, Enceladus, Epimetheus, Erriapus, Farbauti, Fenrir, Fornjot, Greip, Hati, Helene, Hyperion, Hyrokkin, Iapetus, Ijiraq, Janus, Jarnsaxa, Kari, Kiviuq, Loge, Methone, Mimas, Mundilfari, Narvi, Paaliaq, Pallene, Pan, Pandora, Phoebe, Polydeuces, Prometheus, Rhea, Siarnaq, Skadi, Skoll, Surtur, Suttung, Tarqeq, Tarvos, Telesto, Tethys, Thrym, Titan and Ymir.
The dozens of moons orbiting Saturn vary drastically in shape, size, age and origin. Some of these moons have rocky surfaces, while others are porous, icy bodies. Many have craters, ridges and valleys, and some show evidence of tectonic activity. Some appear to have formed billions of years ago, while others appear to be pieces of a bigger, fragmented body. The most interesting one is Titan, the biggest of them all. Larger than Earth's Moon, Titan even has its own thick atmosphere -- the only natural satellite in the Solar System with such a luxury. During its four-year mission in this immense region, the Cassini spacecraft will extensively photograph many of these moons and collect data that will increase our understanding of their composition.
Astronomers keep finding new moons, both using ground-based observatories and cameras onboard Cassini.

The largest, Titan, is easily visible in most telescopes. Titan orbits Saturn in about 16 days. The next brightest moon, 10th magnitude Rhea, can be found orbiting about two ring diameters from Saturn. Saturns other visible moons are Tethys, Dione, Enceladus, Mimas, and Iapetus. Mimas and Enceladus are challenging to view because of their proximity to Saturns rings.

Posted by Unknown at 3:47 PM No comments:

Venus occultation by Moon on 26th 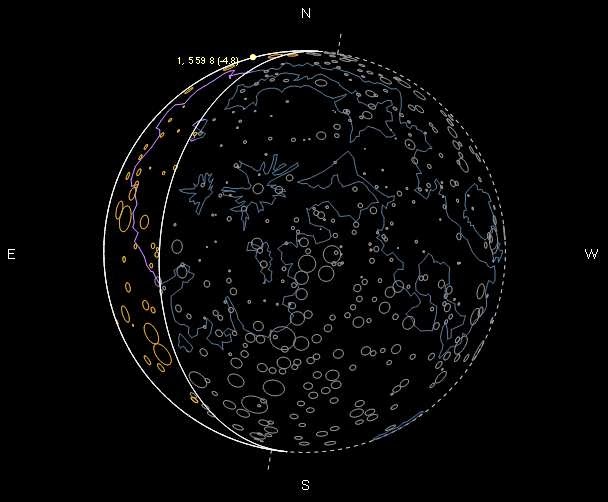 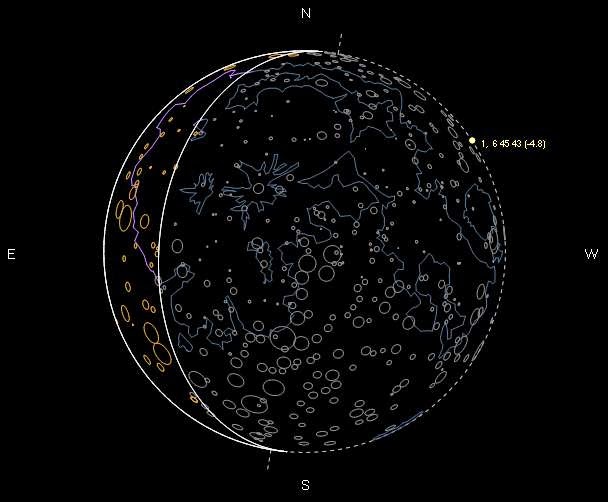 Posted by Unknown at 1:20 PM No comments:

Annular-total solar eclipse of 2013 November 3 from Michael Zeiler on Vimeo.
Posted by Unknown at 12:14 PM No comments: